Highlights of the 2016 Graduate Student Conference  — Research Without Borders

This fourth event comprised AU graduate students, faculty members and multiple volunteers, moderators and facilitators, who worked tirelessly over the past year to plan the successful two-day conference.

With a theme entitled Research Without Borders, participants presented their research either in-person, virtually, or via poster — evidencing a clear-cut platform on which they benefited by receiving critical feedback of their work in a supportive yet scholarly environment of colleagues and faculty members. 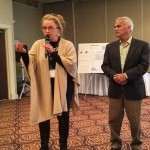 Keynote speaker, professor and former AU doctoral student in the Centre for Distance Education, Dr. Susan Bainbridge, addressed the nearly 90 member audience on her work in Kathmandu, Nepal, which she titled “Crossing the Border.”

“I didn’t just want to talk about education; I knew this would be a mixed group of people studying in various fields,” said Bainbridge.

“So yes, I physically crossed a political border to do my research, but I think in this global world, you’re also crossing cultural and ethnic borders — even if you’re remaining in your own country to do research.”

More importantly, she explained, “you’re crossing the borders in your mind … [that includes] your biases that you don’t even know you have.”

Another observation of note was the fact that, for the first time at the FGS-AUGSA conference, a few people presented who either, 1) weren’t yet grad students, and 2) weren’t grad students of Athabasca University.

One of AU’s undergraduates received permission to present her studies at the event, while two graduate students — one from AU and the other, a master’s student from Mt. St. Vincent University in Halifax — presented theirs.

While Hachey is also a current AU grad student, MacCallum joined her colleague from Dalhousie to present her poster research. The FGS welcomed her with open arms — an example of competing post-secondary presentations perfectly encapsulating AU’s conference theme of Research without Borders.

“It is a fantastic approach,” remarked Hachey.

“We talk about interdisciplinary crossing of borders and this is just another example of how, as researchers and students and educators, we can learn from each other and learn from different institutes.”

MacCallum agreed. “I heard about the Athabasca University graduate conference for students, and I thought, what a great opportunity for me to come out.”

She said the conference was an opportunity to meet students outside of her field of expertise.

“I really enjoyed it,” MacCallum wrote in a post-conference evaluation form.

Hawranik concurred this post-secondary cross-pollination phenomenon fit the conference theme to a tee. 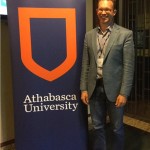 Another highlight of the conference was the opening greeting by Alberta Advanced Education Minister Marlin Schmidt.

Schmidt thanked event organizers for their efforts and offered well wishes to the student and faculty research presenters.

“Historically, grad students have been focused more on their work than clinical advocacy, but I’m pleased to say that’s changing — that grad students at all the universities have formed an umbrella organization that we’ve been consulting with,” Schmidt announced.

It was the minister’s third AU-related event in recent months, which also included the university’s June convocation ceremonies, as well as providing welcoming remarks to the institution’s incoming eighth president, Dr. Neil Fassina.

He also noted upcoming “important changes” his ministry is considering to the legislation related to labour relations and grad students’ associations.

“Those consultations are ongoing right now and I’m pleased to be able to work with the Athabasca University Grad Students’ Association, as well as all of the others, to make sure that we have labour relations legislation that flies with the constitution — but also brings fairness to labour relations on campuses all across the province.”

Finally, Schmidt reiterated the government’s unwavering support for Athabasca University in its future role as a leader in post-secondary education.

“This government is committed to making sure that Athabasca University is a successful university for the foreseeable future, and that it will remain in Athabasca so that it can serve that community, as well as the worldwide community that it serves online.”

View pictures of the conference here.